European Parliament resolution of 18 April 2012 on the Annual Report on Human Rights in the World and the European Union’s policy on the matter, including implications for the EU’s strategic human rights policy

“91. Recalls its resolution of 25 November 2010 on the situation in Western Sahara; condemns the ongoing repression of Sahrawi people in the occupied territories and calls for their fundamental rights, including freedom of association, freedom of expression and the right to demonstrate, to be respected; calls for the release of the 80 Sahrawi political prisoners and, as a matter of priority, of the 23 who have been held without trial in Salé prison following the dismantling of the Gdeim Izik camp; reiterates its call for the establishment of an international mechanism to monitor human rights in the Western Sahara and for a fair and lasting settlement of the conflict on the basis of the right to self-determination of the Sahrawi people, in accordance with the relevant United Nations resolutions;”

Press Release from the Polisario Front Representation for Europe

Read and view the actions around the world under the MINURSO 2012 banner at http://minurso.tumblr.com

Matthew Russell Lee in New York at Inner City Press is letting out some of the secrets happening behind closed doors in the Department of Peace Keeping Operations, the UN Security Council  Group of Friends and at UN press stakeouts in New York.  see:

On W. Sahara, Not Answering on Morocco Lobbying, UN Decries Leaks to Press

On Western Sahara, France Says Only 1 “Friend Has Problems,” Draft Not Agreed?

The Arab Spring began in the Western Sahara. In late 2010, the indigenous Saharawi population of this territory demonstrated against the occupying Moroccan authorities. Their demonstrations were violently put down. Eleven Saharawis were killed.

Nick Clegg faces embarrassment after it was disclosed that his wife represents a firm that has been accused of trampling on the human rights of ‘Africa’s last colony’.

A ‘substantial’ part of lawyer Miriam Clegg’s work, for which she is paid up to £500,000 a year, is understood to come from Moroccan mining giant OCP. 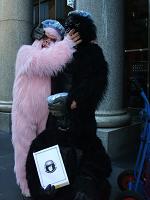 The Australia Western Sahara Association (AWSA) organised on Friday 13 April 2012 in front of the French Consulate in Melbourne a protest under the slogan: human rights for Western Sahara – the time is now!
Some of the protesters were dressed as the three monkeys which embody the proverbial principle to “see no evil, hear no evil, speak no evil”. They represent the way in which the United Nations has turned a blind eye to human rights abuses in occupied Western Sahara, most notably, France

END_OF_DOCUMENT_TOKEN_TO_BE_REPLACED

The National – Arts and Culture

Javier Bardem’s documentary about the Western Sahara conflict, Sons of the Clouds, premiered at the Berlinale in February.

This year’s festival, a notoriously politicised event at the best of times, was predictably heavy with features relating to the Arab Spring. But with Sons of the Clouds, which was produced by and stars Bardem, came a film highlighting an Arab conflict that has remained out of the limelight.

As claimed by Noam Chomsky in the documentary’s opening scenes, the Arab Spring did not, as widely held, begin with the self-immolation of Mohammed….(cont…)

By Carmela Baranowska, Journalist and Filmmaker

The Hindu, Opinion, April 2, 2012
Aman Sethi
The story of El Haked, the Moroccan rapper who defied his monarch.

“The Spiteful One sits on a floor mattress eating cheese and scrambled eggs straight from a frying pan on a table on the first floor of an abandoned slaughterhouse on the outskirts of Casablanca….cont.
Full report >>