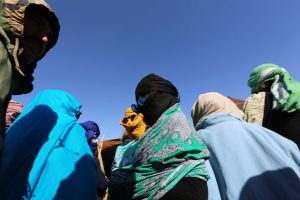 Women at a traditional festival at the Boujdour camp near Tindouf, Algeria
Photograph by Nicolas Niarchos

John Bolton and a former German President have helped spur the first negotiations over the Western Sahara in six years.
……”Since Bolton’s appointment, in March, there has been a flurry of activity regarding the Western Sahara conflict at the U.N. and in the State Department. “There are two Americans who really focus a lot on the Western Sahara: one’s Jim Baker, the other’s me,” Bolton told me. “I think there should be intense pressure on everybody involved to see if they can’t work it out.” This spring, at the insistence of the U.S. and to the chagrin of Moroccan and French diplomats, the U.N. peacekeeping mandate for the Western Sahara was extended by only six months rather than a year…”