Western Sahara before colonisation
Before Spain colonised Western Sahara, that part of the desert in North-West Africa was being used by the nomadic people of the area to pasture their animals and to grow crops, when and where conditions were favourable in this area of low and spasmodic rainfall. 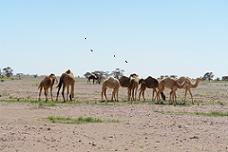 At the time of colonisation by Spain, 1884, Western Sahara was inhabited by peoples who, though nomadic, were politically and socially organised in tribes and under chiefs competent to represent them. Spain acquired its sovereignty over Western Sahara not by it as a land without an owner, terra nullius, but through agreements concluded with local rulers.

While Spain was the colonial ruler of the territory of Western Sahara, it did not have effective control over the people of the area. The Saharawis resisted colonisation and there were bloody clashes until they were “pacified” in 1934. However at this time, and into the 1940s, the Spanish administered only a handful of settlements, none of which was larger than a medium sized village. El Aaiun (Laayoune), now the capital of Western Sahara was not established until 1940. Between 1956 and 1958 there were riots in Western Sahara and bloody battles between the Spanish and the Saharawi resistance.

In 1963, the United Nations (UN) included Western Sahara in the list of countries to be decolonised and asserted the right of the Saharawi people to self-determination. In 1966 the UN, for the first of many times, passed a resolution calling for this self-determination to be exercised by referendum.

There was organised pressure from the Saharawis for independence in the 1960s and early 1970s. This led to the establishment of the Polisario Front in 1973 and the beginning of its armed struggle. By 1974 Spain announced its intention to hold a referendum in 1975; however, it announced it was postponing the referendum when, at the request of King Hassan II of Morocco, the UN General Assembly sought an advisory opinion from the International Court of Justice (ICJ) on Western Sahara.

On 16 October 1975, the ICJ said in its advisory opinion in (1975) volume 59 of the International Law Reports page 13, with this quote at page 85:
[T]he Court’s conclusion is that the materials and information presented to do not establish any tie of territorial sovereignty between the territory of Western Sahara and the Kingdom of Morocco or the Mauritanian entity. Thus the Court has found no legal ties of such a nature as might affect the application of resolution 1514 (XV) in the decolonization of Western Sahara and, in particular, of the principle of self-determination through the free and genuine expression of the will of the peoples of the Territory.

Morocco’s military invasion of Western Sahara and the “Green March”
King Hassan II disregarded the court’s conclusions and on 31 October 1975 Moroccan troops crossed the frontier and clashed with Polisario guerrillas in the northeast of Western Sahara. The king had been planning for the march long before the ICJ gave its advisory opinion and on 6 November 1975, he ordered the 300,000 marchers he had assembled near the border of Morocco and Western Sahara to commence “The Green March” so named after the holy color of Islam.

At least 160,000 marchers entered Western Sahara. King Hassan threatened Spain to open direct negotiations with Morocco or else he would continue in his quest. Spain gave in. Negotiations between Morocco, Mauritania and Spain began in Madrid 14 November 1975 and culminated in the signing of  the Madrid Accords, sometimes called the Madrid Agreement or the Tripartite Agreement.

As the long term dictator of Spain, General Franco lay dying, his Government abandoned its responsibilities as a colonial power and purported to divide Western Sahara between Morocco and Mauritania.

Both countries seized part of the land, but Mauritania soon made peace with the Polisario Front. The Saharawis, through the Polisario Front, continued the fight against Morocco.
On 6 November 1975, the Security Council “deplored” this action and ordered King Hassan to withdraw the marchers. However the king did not withdraw his troops or the marchers and Morocco’s invasion of Western Sahara continues to this day. The Security Council’s resolution, 380 (1975), stated:

Noting with grave concern that the situation concerning Western Sahara has seriously deteriorated,

Noting with regret that, despite its resolutions 377 (1975) of 22 October and 379 (1975) of 2 November 1975 as well as the appeal made by the President of the Security Council under its authorization, to the King of Morocco with an urgent request to put an end forthwith to the declared march on Western Sahara, the said march has taken place,

Acting on the basis of the aforementioned resolutions,

1. Deplores the holding of the march;

2. Calls upon Morocco immediately to withdraw from the Territory of Western Sahara all the participants in the march;

3. Calls upon Morocco and all other parties concerned and interested, without prejudice to any action which the General Assembly might take under the terms of its resolution 3293 (XXIX) of 13 December 1974 or any negotiation which the parties concerned and interested might undertake under Article 33 of the Charter of the United Nations, to co-operate fully with the Secretary-General in the fulfilment of the mandate entrusted to him in Security Council resolutions 377 (1975) and 379 (1975).

The effects of Morocco’s invasion
Many Saharawis fled the tanks and aerial bombardments of napalm and cluster bombs of the Moroccan invaders and set up refugee camps near Tindouf in south-west Algeria where more than 165,000 of them now live. Life is scarcely viable in the harsh Hamada desert where the refugees live, as there are no means for self sufficiency. Consequently, they are supported by the UN Food Program and other humanitarian aid provided through the generosity of non government organisations of people throughout the world.

Nevertheless, the Saharawis have set up their own Government, the Saharawi Arab Democratic Republic (SADR) which not only runs the camps and attends to the education of the children and the health care of everyone in them, but also represents the interests of the Saharawi people in Europe and elsewhere and presses UN agencies, the EU and governments throughout the world. SADR is recognised by at least 80 nations.

Those who remained in their homeland have constantly faced arrest, imprisonment, death and “disappearance” at the hands of Moroccan occupying forces. Their escape is blocked by a 2,400km wall dividing Western Sahara into the coastal zone occupied by Morocco and the interior part held by the Polisario Front.
For more information see our Human Rights link.

The ceasefire, MINURSO and the referendum on self-determination
The war between Morocco and the Polisario Front continued until an UN-African Union brokered a ceasefire in 1991.

MINURSO (Mission des Nations Unies pour un Referendum au Sahara Occidental) was established to organise a referendum for self-determination of the Saharawi people in 1992 as part of peace process between Morocco and Polisario Front. However, by 1996 the peace process was in stalemate.

In 1997, James Baker (George H. Bush’s Secretary of State) became a UN envoy and drew up a new plan for the referendum, Framework agreement on the Status of Western Sahara.  Morocco refused to co-operate. In 2003 Baker made a new plan, Baker Plan II, titled Peace plan for self-determination of the people of Western Sahara. . This was supported unanimously by the UN Security Council and by SADR. Morocco still refuses to allow the referendum.

It is time for the referendum to be held.