“Queen of the desert blues and voice of the Sahrawi people” 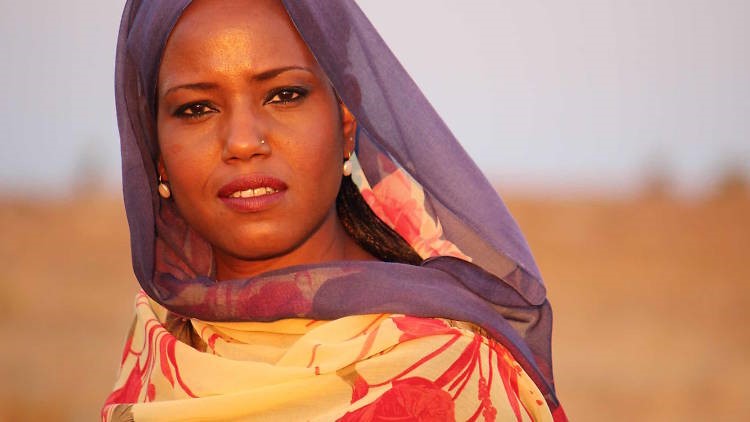 Coming to international attention in 2014 after the release of her third album Soutak, Aziza Brahim tours extensively across the globe. In Melbourne for the first time and for one show only, the queen of the desert blues, performs music from her sublime 2016 release Abbar El Hamada.…
Powerfully voiced with arresting and spellbinding grace, Aziza’s languid laments tell of the Western Sahara refugee plight – a tale of both hardship and uplifting hope against all odds. Her music traverses an electrifying expanse between the dusty plains of her Western Saharan roots, the upbeat Latin rhythms of the Cuba of her youth and Spain, her adopted homeland.
Aziza is both a highly potent sonic poet and the voice of the Saharawi people in their ongoing struggle for recognition and justice. Innovation, truth, humility and political outspokenness are the raw materials of her vision.

Australia Western Sahara Association (AWSA) celebrates the Saharawi national day 2009 in Melbourne
AWSA organised on Sunday 1 March in Alphington park in Melbourne a public event to mark the 33rd anniversary of the proclamation of the Saharawi Republic.
Georgia Vlassopoulos, chair of AWSA (Victoria) welcomed all those who attended the event to celebrate the Saharawi National Day and said “The Saharawis have used their exile constructively and built a democratic state which could transfer to government of their country. Let’s hope that this chance will come sooner rather than later”.

The Polisario Representative, Kamal Fadel thanked all those who attended the event on behalf of the Saharawi people.

The event was attended by many members of AWSA and their families as well as the Polisario Representative in Australia.

A barbecue was provided and a Saharawi tea ceremony was performed.

Australia Western Sahara Association (AWSA) was set up to raise awareness and promote the Saharawi cause in Australia, and to campaign for a free and fair referendum on self-determination for the Saharawi people.

Flags raised in Australia to commemorate the Saharawi National Day

On 27 February 2009 the flag of the Saharawi Republic (SADR) has been raised on the Town Halls of Leichhardt (Sydney), Newcastle and in various cities and towns of Australia such as Melbourne, Perth, Hobart, Geelong and Darwin. The flags are raised to mark the 33rd anniversary of the proclamation of the Saharawi republic.
The Saharawi flag is officially raised in Australia for the first time as a gesture of solidarity and friendship with the Saharawi people.

“Leichhardt Council passed a unanimous motion to raise the flag of Saharawi Republic on their special day as a gesture of solidarity and friendship with the people of Western Sahara. He added “This commemorates 33 years since the people of Western Sahara declared a republic in Western Sahara to fill the vacuum left by the withdrawal of Spain the then colonial power.” And further added that “This is also significant because it will be the first time the flag of the Saharawi Republic has been flown officially in Australia” 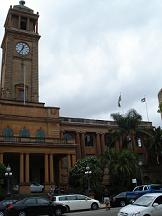 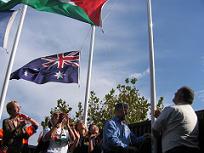 Today we raise the flag of Western Sahara for the first time in Australia as a gesture of solidarity and friendship with the people of Western Sahara.
Press release: vicraisingtheflag27feb09-1.pdf

1.15pm: A journalist from Western Sahara tells his story.
Sought by the Moroccan occupying forces for his part in a peaceful sit-in, Malainin Lakhal decided to escape rather than face another spell in gaol. Taking refuge with 160,000 other Saharawis in camps near Tindouf, he found he could help get the story out to the world of what is happening in the occupied territory.
Victoria University, School of Social Sciences, Room G470, Footscray Park Campus, Cnr Ballarat and Geelong Rds. Melways Map: 42 Ref C-2

Morocco’s 32 year occupation of Western Sahara forced over half the Saharawi population to flee their homes and live in exile in refugee camps in south west Algeria. Those who remained in the occupied territories suffer daily human rights abuses at the hands of the Moroccan occupying forces. What Saharawis want is just to exercise their right to self-determination in accordance with UN resolutions. Why has the plight of Saharawis been ignored for so long?

Malainin, an English graduate of Agadir University, was sought by police as a suspected ring-leader of the Saharawi resistance in the occupied Territory.

Since 2000 he has been living in the Saharawi refugee camps near Tindouf in SW Algeria, working as a teacher, a translator for the Saharawi Press Service, a journalist and as secretary-general of UPES, the Saharawi writers’ and journalists’ union.

Through this work he supports his friends still living in the occupied zones, bringing the human rights abuses they suffer daily to the attention of the world.