In September 2019 the Australia Western Sahara Association hosted Tecber Ahmed Saleh, an advocate for human rights, who lives in the Saharawi refugee camps in south-west Algeria.
Tecber’s tour has been generously supported by Union Aid Abroad-APHEDA.

Tecber works in the Ministry of Health in the Saharawi refugee camps and studied in the USA and Spain. Western Sahara has been occupied and its people in exile for 44 years. Approximately 170,000 Saharawis remain displaced in refugee camps. The Saharawi people are calling for the United Nations mission in Western Sahara to add a mandate for the monitoring of human rights in the territory, and for a free and fair United Nations referendum.

It has been a very successful visit to Sydney, Melbourne and Canberra and Tecber is currently in New Zealand for a tour of six cities. 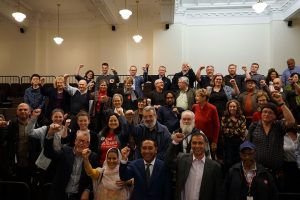 Enthusiastic support for Tecber and the Saharawis at UnionsNSW / Apheda event. Photo courtesy of Holly Creenaune

Press coverage of the Australian part of  Tecber’s tour

You can support the ongoing educational activities and crucial humanitarian relief by donating through  Union Aid Abroad-APHEDA: Support for Western Sahara 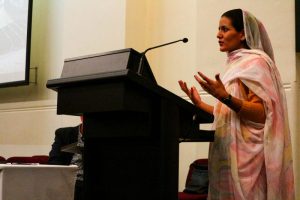 Events in Sydney, Melbourne and Canberra during September

Sydney: Thursday 5 September, 12 midday: Lunchtime talk at Centre for Peace and Conflict Studies, in the HR Carne Lecture Theatre, RMC Gunn Building B19, at The University of Sydney.

Melbourne: Tuesday 10 September 6:30pm: Dinner and fundraiser at the North Fitzroy Arms Hotel.  Tecber lives in the Saharawi refugee camps where she works in the Ministry of Health. She is visiting Australia on a speaking tour supported by Union Aid Abroad APHEDA. Full price meal is $45, concession $40, drinks at bar prices.