With English subtitles the footage shows Saharawis from the refugee camps making a Free Western Sahara with people and filmed by a drone. 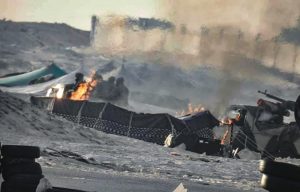 Sahrawis have praised the move by the Polisario Front independence movement to confront the Moroccan army, having had enough of a decades-long stalemate that has kept them from claiming sovereignty over the contested land of Western Sahara. (…cont)

A Rare Look Inside Africa’s Last Colony as Ceasefire End
Democracy Now, Nov 27, 2020
In this special rebroadcast of a Democracy Now! exclusive documentary, we break the media blockade and go to occupied Western Sahara in the northwest of Africa to document the decades-long Sahrawi struggle for freedom and Morocco’s violent crackdown. Morocco has occupied the territory since 1975 in defiance of the United Nations and the international community. T

The ceasefire that has held in Western Sahara broke down on Friday 13 November, and has led to the resumption of full-scale hostilities between Morocco and Western Sahara.
Consequently there is a further deterioration of the geopolitical situation in the whole of the Maghreb.
The Australia Western Sahara Association (AWSA) condemns Morocco’s flagrant violation of the terms of the ceasefire and has released the following Statement:

Statement of solidarity with the people of Western Sahara
For immediate release, 18 November 2020

“The international community must ensure the exercise of the Saharawi people’s right to self-determination.
The Geneva Support Group for the Protection and Promotion of Human Rights in Western
Sahara (253 member organisations) condemns the breakdown of the ceasefire in force since
1991 in the Non-Self-Governing Territory of Western Sahara on the part of the Kingdom of
Morocco, which did not hesitate to deploy its troops and weapons in front of a group of
unarmed civilians who were peacefully demonstrating in the demilitarised zone of Guerguerat
in the south-east of the Territory. (…cont.)”

Brahim Ghali, President of the Saharawi Arab Democratic Republic (SADR) and leader of the Western Saharan independence movement, the Polisario Front, issued a decree ending the ceasefire that has existed between pro-independence forces and Moroccan occupation forces since 1991 on November 13