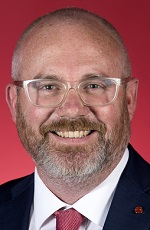 In this excellent speech Senator Ayres spoke of the breakdown of the three-decade-long ceasefire saying the resumption of military action was a source of deep concern for the entire international community.

“Senator AYRES (New South Wales) (19:50): This evening I want to make a short contribution on a region that’s too often neglected in the parliament and in Australian public debate—that is, North Africa. The ceasefire between Morocco and the Western Sahara independence movement, Frente Polisario, has been an uneasy but longstanding source of stability in the region….(cont.)”