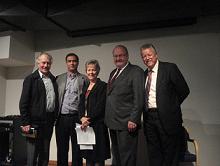 Over 60 Sydneysiders attended an evening of film and discussion organised by the Australia Western Sahara Association (AWSA) in partnership with the Sydney Mechanics’ School of Arts on Thursday 15 September 2011, under the title, “Western Sahara: The untold story”.
El Problema, a multi-prize winning documentary which tackles the situation of human rights abuses in the occupied areas  was screened,
as well as an ABC TV (Australia) segment about the importation of phosphate from Western Sahara to Australia.

Professor Emeritus Stuart Rees, Director of the Sydney Peace Foundation at the University of Sydney, introduced El Problema. He said that despite the fact that certain international powers use their influence to keep issues such as Western Sahara untold, the documentary El Problema tells the story. It provides a powerful insight into the shocking situation of occupation and human rights abuses by the Moroccan regime.

He said that it was regrettable that powers like France hamper the peace process by threatening to use their veto at the UN.

Professor Rees said that he was moved by the courage and tenacity of the Saharawi human rights defenders such as Aminatou Haidar who keep challenging the occupation by peaceful means.

The Hon John Dowd President of the Australian Section of  International Commission of Jurists attended the event and spoke about the illegality of the Madrid agreements and the exploitation of the natural resources of Western Sahara particularly the phosphates which are imported to Australia.

The screening was followed by a lively discussion with the participation of the Saharawi representative to Australia.