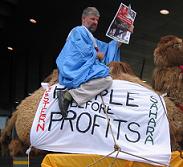 Ali The Camel to attend Bendigo Bank AGM
Bendigo Bank, a community bank set up to achieve a prosperous, sustainable community, is holding its AGM on Tuesday 29 January in Bendigo, Victoria, Australia. Ali the Camel plans to attend.

Ali the Camel says that Western Sahara is part of the global community and would like Bendigo bank to strive for the implementation of the bank’s ethical criteria. Ali would like to bring to the attention of Bendigo Bank’s board the recent decision by an insurance company KPL in Norway and a pension fund KPA in Sweden to exclude Wesfarmers from their investment portfolios on ethical grounds because of its continued importations of phosphate from Western Sahara. Two other Australian companies, Incitec Pivot and Impact, are also guilty of this practice.

Morocco is illegally occupying Western Sahara and in 2002 the UN ruled against Morocco’s exploitation of the natural resources from Western Sahara. Ali urges Bendigo Bank to review its investments in managed funds on offer to customers and to follow the KPL and KPA’s concerns.

The Western Sahara people have been suffering human rights abuses in the occupied zone or waiting for 32 years in refugee camps for the opportunity to have their vote of self determination as promised by the UN brokered cease fire of 1991.

BACKGROUND
Wesfarmers blacklisted
The Australia Western Sahara Association (AWSA) is urging Bendigo Bank to check the ethical status of the investments in its managed funds. Such funds often include shares in Incitec Pivot and Wesfarmers, but the latter has recently been blacklisted in Norway and Sweden on ethical grounds.

On 3 December 2007 Norwegian insurance company KLP ( Kommunal Landspensjonskasse Mutual Insurance Company (KLP) excluded an Australian company, Wesfarmers, from its investment portfolio on account of its fertiliser subsidiary CSBP. The reason is that CSBP, based in Fremantle WA, imports phosphate from Morocco sourced in Western Sahara. The resource belongs to the people of Western Sahara, and is sold by Morocco neither with their consent nor for their benefit.

“KLP … excludes the fertiliser producer Wesfarmer as a result of illegal import of phosphate from Western Sahara. The area is occupied by Morocco, and in 2002 the UN declared all extraction of natural resources in West Sahara as illegal.”

KLP went on to explain that Wesfarmers not only violates their ethical guidelines but is excluded also “because they have not rectified criticisable conditions or in other ways signalled a way to solve their problem”.

AWSA agrees that it is time these companies indicate how they will solve this problem. The Association asked the three Australian fertiliser companies to reconsider their illegal importation of phosphate rock from Western Sahara two years ago, yet have seen no change in policy or practice on the importation of the “stolen” phosphate. The Australian Government ought to encourage the companies to put the trade on hold until the sovereignty of the country is determined.

The Australian government sought to justify the imports on the basis that no trade sanctions exist concerning Morocco. This is a misleading position because the UN legal opinion of 2002 clearly states that the exploitation of the natural resources of Western Sahara is illegal. The lack of sanctions does not make it legal (see: http://www.arso.org/UNlegaladv.htm).

The Australian Government and companies should not wait for sanctions to be imposed against Morocco in order to act in a legal, moral and ethical manner. Our Government has moral obligations to do the right thing and is indeed expected to lead in this instance as the Scandinavian Governments have done. This is particularly the case when it is clear that importing phosphates from Western Sahara through Morocco is illegal as Morocco has absolutely no right to deal in the natural resources of this Territory.

Illegal occupation
No country in the world recognises Morocco’s claim to the territory which has been on the UN’s list of countries waiting to be decolonized for 40 years.

Morocco commits gross violations of human rights in the occupied Western Sahara. Murder and torture are being undertaken in the infamous “Black Jail” in El Ayoun, the town from which phosphate is being shipped to Fremantle, Portland, Geelong and Hobart in Australia. Monies received from the sale of phosphate to Australia are being used to enforce the military occupation and to equip the wall dividing Western Sahara.

Morocco is an absolute monarchy with no real democracy. The Moroccan King and his family control and rule the country. The King still rules in a medieval way with the powers to dissolve Parliament, appoint the main Government Ministers and send those who question his divine rule to jail for indefinite periods.