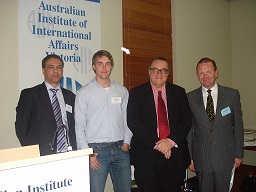 The Australian Institute of International Affairs hosted an event on Wednesday 5th October in Melbourne on the issue of Western Sahara under the title: Western Sahara and its Phosphate Rock: is Australia in a Hard Place?

The speakers during the event were the Saharawi representative to Australia Mr Kamal Fadel and Mr Tim Robertson SC, who is a senior barrister and civil libertarian with a very broad practice including international law.

AUDIO TRANSCRIPT of the meeting – at this link scroll to the meeting dated 18/10/2011 titled  ‘Western Sahara and its phosphate rock: is Australia in a hard place?’

READ A SUMMARY of the presentations by the two speakers