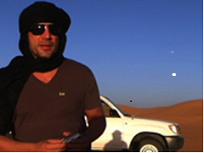 PRESS RELEASE: Sons of the Clouds: the Last Colony – a documentary

Produced and narrated by Javier Bardem, written and directed by Alvaro Longoria
Stars Javier Bardem, Elena Anaya, Carlos Bardem
Melbourne’s only screening will be held on Tuesday 3 December at 7 p.m. as a collaboration between the Australia Western Sahara Association (AWSA) and Filmoteca at the Australian Centre for the Moving Image (ACMI)A look at how colonization of the Western Sahara went wrong and has left nearly 200,000 people living in refugee camps.  This is a situation that is largely unknown by many people.

Bardem decided that one way of raising awareness of the plight of the Saharawis was to use his celebrity to bring this about.

He had been to the refugee camps in 2008 to attend a FiSahara Film Festival and he fell in love with the Western Saharans and felt it necessary to help their fight for self-determination.

The film explains that Western Sahara was a Spanish colony until 1975 when it was invaded by Morocco causing many to flee to desert camps in Algeria and others to remain in their territory occupied by Morocco or to live in a small territory of virtually unhabitable land.

Bardem and Longoria worked on the film for three years and used archival footage (and the internet).  It seems that Morocco was not prepared to be involved in the documentary.

The documentary shows the courage and peaceful means by which Western Saharawis attempt to regain their independence under the most distressing situations. Human right abuses in the region have been well-documented.

Similarities can be drawn between their struggle and the fight for self-determination in East Timor.

The culture and the very lives of the Sahrawis are in danger of becoming extinct or erupting in violence.  By then, it will be too late. We cannot stand by and allow justice and human rights to become a casualty of political and diplomatic agendas.   (Javier Bardem)

There will be a Q & A plus a party after the screening. (Included in the ticket price) $25 ($20 concession)
—
For ticket bookings: Australian Centre for the Moving Image (ACMI), www.acmi.net.au/filmoteca_son_of_clouds.aspx

A press kit and images are available from Wild Bunch http://www.wildbunch.biz/films/sons_of_the_clouds__the_last_colony