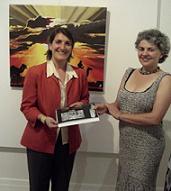 Australia Western Sahara Association (Victoria)  PRESS RELEASE
Friday 16 February, Images of Western Sahara -­ A picture tells a thousand words.   An exhibition to celebrate the national day of Western Sahara, the 31st anniversary of the proclamation of the SADR, (27 February) was opened on Thursday by Maria Vamvakinou Member of the Federal Parliament, at Bundoora Homestead Gallery
in Melbourne alongside a new textile exhibition, Walala Wasala ­ the Fabric of African politics Western Sahara is certainly part of the fabric of African politics, being the last colony in Africa, still to undergo its decolonization process. The exhibition comprises three elements, paintings by Saharawi artists living in refugee camps near Tindouf in south west Algeria, images by British photographer, Simon James of Saharawi landmine victims, and black and white photos taken by Georgia Vlassopoulos during the visit of an Australian delegation to the region in 2004.
Mrs Vamvakinou said: ³Oppressors think that if they just keep on long enough, the world will forget and the problem will disappear. But the Saharawis will resist as long as the oppression persists. They will not forget their right to self-determination, and we must stay with them in their struggle until they are able to exercise their right though a free and fair referendum organised by the UN.”

The Exhbition was attended by the Polisario representative, members of the Australia Western Sahara Association as well as a good number of the public.

Western Sahara ­ a country divided by a wall

A referendum of self-determination was being prepared in 1974 by Spain as it withdrew from its colony known then as Spanish Sahara. Instead of holding the referendum, Spain divided Western Sahara between its neighbours: Morocco to the north and Mauritania to the south. The Saharawi people resisted this take-over, but the new colonizers fought back. Over half the population fled to the Algerian border. After being bombed with napalm and cluster bombs, they were given refuge within Algeria near Tindouf.

The camps
Four refugee camps were set up in this inhospitable desert, called the Hamada, where no-one had lived before. The Saharawis have been exiled there for over 30 years, waiting patiently to return to their homeland. The referendum has still not been held.

The paintings in our exhibition, by Saharawi artists living in these camps, show aspects of their daily lives and concerns.

The wall
The war lasted over 14 years. Mauritania withdrew, but Morocco continued fighting and during the 1980s built a military wall over 2700 km long with over 100,000 troops to separate the territories it occupies from those liberated and held by the Polisario Front, the Saharawi national independence movement. Eventually, in 1992 the UN brokered a cease-fire and set up a mission known as MINURSO to supervise the promised referendum, which would decide the future of the country and allow the removal of the
wall.

The military wall, or berm, is not very high, but is wide with 200 metres of landmines on each side along its length – 2 million at least – causing frequent injuries and deaths, especially among nomadic herdsmen and their families.

Simon Thorpe¹s dramatic photographs show Saharawi victims of these landmines
in the desert.

The occupation
Saharawis who remained in their homeland at the time of the exile have been separated from their families for over 30 years. Morocco has brought in many settlers who now not only outnumber the original Saharawis, but are given preferential treatment for housing, jobs and other social benefits. Morocco exploits the natural resources of the country, including phosphate, which Australia imports.

Since May 2005 continuing peaceful demonstrations calling for the right to self-determination have been brutally repressed. The Saharawis call it their intifada of independence and ask for the international community to force Morocco to respect human rights.

Georgia Vlassopoulos, on an AWSA delegation to the region in April 2004, took black & white photographs of both the refugee camps near Tindouf in Algeria and the liberated territory of Western Sahara around Tifariti. These form the third part of our exhibition.