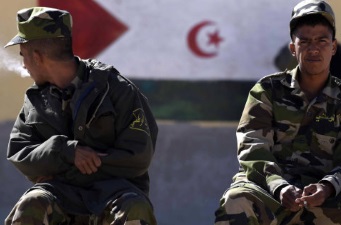 Security men sit in front of a mural of the Western Sahara flag at at the Smara refugee camp in Algeria’s Tindouf province, home to some several thousands Sahawari refugees, ahead of the 16th edition of the Sahara Marathon, which is organised to demonstrate solidarity with the Saharawi people and to support the independence of the Western Sahara, on February 22, 2016 . Farouk Batiche / AFP / Getty Images

The inclusion of Morocco back into the fold is a shame on the African Union when the unresolved conflict of the Saharawi people still hangs in the balance.