A young female entrepreneur from a Sahrawi refugee camp in Algeria has opened the first pizzeria run only by women. 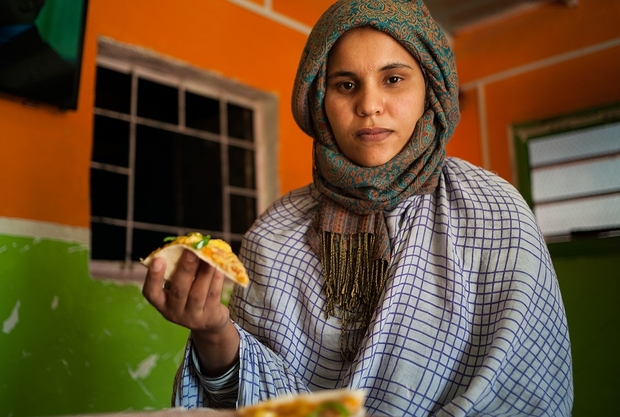 Hindu Mani is the first Sahrawi woman to open a pizzeria in the Sahrawi refugee camps, around 50 kilometres from the Algerian city of Tindouf (MEE/Eugenio G. Delgado)

Women driving in the Sahrawi refugee camps, 50 kilometres from the Algerian city of Tindouf, is a rarity, but it is not the only thing Mani has gained notoriety for. With a staff of four women, Mani runs the only Sahrawi pizzeria in the camps. 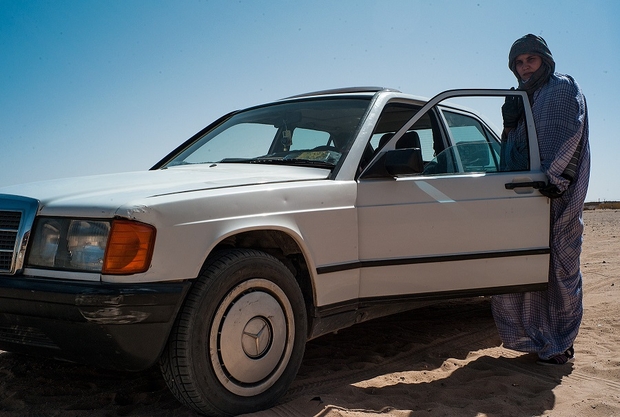 Hindu Mani delivers pizzas with her 1989 white Mercedes Benz in Aswerd camp, around 50 kilometres from the Algerian city of Tindouf (MEE/Eugenio G. Delgado)

“From the beginning I thought of [opening a pizzeria] with the idea of empowering young Sahrawi women who have been unable to [finish] their studies or work,” Mani said.

According to Mani, there are places where camp residents can buy pizzas made in Tindouf, but she bakes the pizzas in her shop and serves them fresh out of the oven.

“Our pizzas are made in the moment based on demand, all-day long from Saturday to Thursday,” she said. 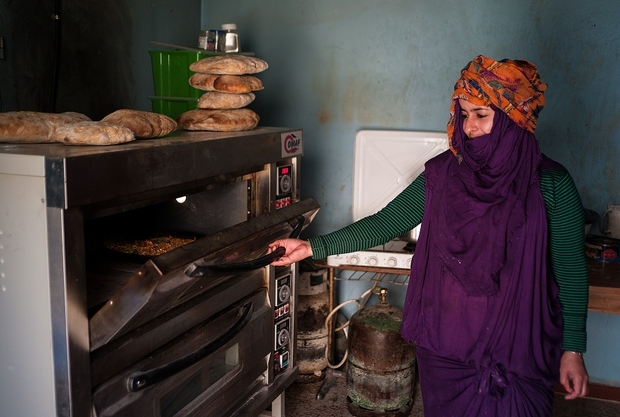 What is her speciality? “The camel pizza. It is an authentic Sahara cheese pizza which contains camel meat, tomatoes, onions, peppers, olives and aromatic herbs typical of the Sahrawi desert,” said Mani.

Eighteen-year-old Ali Omar loves the camel pizza. “It tastes like our country,” he said. “I like to watch football on television at the pizzeria. There is as great atmosphere.”

In a desert environment where there are almost no leisure options, the Sahrawi Pizzeria has become a meeting place for young Sahrawis and NGO workers from several European countries like Spain, Italy, Germany and France.

Watching football games and socialising in the relaxed environment with the boost of having wifi has solidified a loyal clientele. Mani is even considering expanding her pizzeria and introducing Shawarma and fried chicken to her menu.

“When there is a football match, it’s really crowded, so we are thinking of building a terrace, reusing car wheels like tables and chairs, she said. 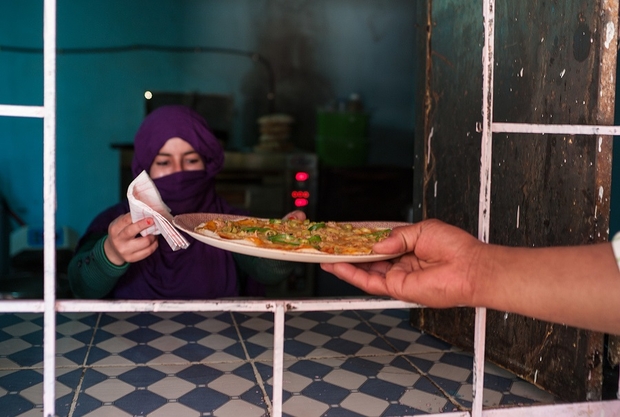 A customer picks up his camel pizza from a pizzeria in Awserd (MEE/Eugenio G. Delgado)

For Spanish volunteer Africa Sachez, 32, who works as a teacher in the refugee camps for the Spanish NGO, the pizzeria “is a charming place to take a break and rest”.

Yet the service does not stop there. Mani is probably the only woman in Algeria delivering pizzas in her Mercedes. “I deliver the pizzas in my Mercedes Benz,” she said proudly.

Mani is one of more than 165,000 Sahrawis that have been living a life of exile in the area surrounding Tindouf, Algeria, for the last 42 years, after fleeing Moroccan forces during the Western Saharan War. They are waiting for an independence referendum that was promised to them by the United Nations when a ceasefire with Morocco was established in 1991, following Spain’s failed decolonisation in 1976. 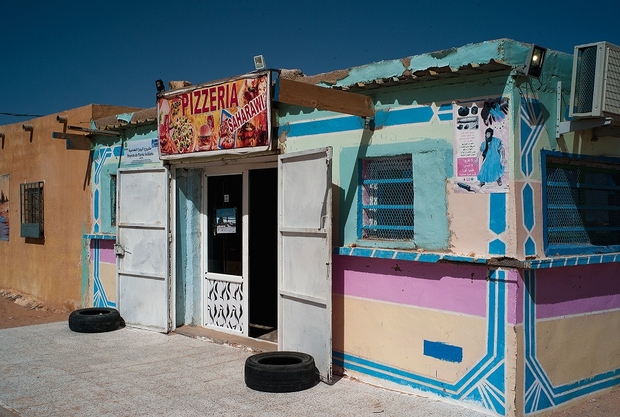 “We should not fall into sloppiness or frustration. I think the pizzeria is helping many people get way from this harsh situation and relieve them of the suffering we live each day,” Mani said. “We, the refugees, have been in this hostile land for more than 40 years and there are no opportunities for young people. Only to stay or to emigrate,” she added.

Master Chef Winner Mani was born and raised in the camps, but studied in Algeria until she completed high school. After suffering gastritis and stomach ulcers that led to severe anemia, she decided to return back to the camps to be with her family.

She chose to postpone marriage and children for a while to focus on her professional career.

“In the future, I would like to get married and raise a family, but I really believe that now I am in a moment in life where my priorities are different: to think about a project of my own, my professional career and to contribute something to my people, ” she said.

Born out of Mani’s will to promote self-sufficiency and entrepreneurship for women, the pizzeria finally opened in 2016 in the refugee camp of Awserd.

“The idea came from necessity because there is almost no work for young people here, much less so for women. I want to promote the independence of women who work, regardless of what society says,” Mani said.

It was not easy for her in the beginning. Many doubted that women could successfully run a business that served customers through the late hours of the night in the conservative society.

Some fellow Sahrawis advised Mani to give up trying on her business, saying that “they would never eat pizza because it was not even food.”

But Mani says that the discouraging words were few in comparison to the positive feedback and support that many gave to her during the development of her project.

“My greatest support has definitely been my parents, they were always there encouraging me to continue and persevere,” the young Sahrawi businesswoman recalled.

Mani has always been passionate about cooking. “Since I was five or six years old, I watched [cooking] television programmes, and if I had the raw material of some dish, I tried to do it at home,” she said.

Mani was 19 when she and won a pseudo Masterchef contest in the camps with her delicious pizza.

According to Mani, it was a few years ago, when Ramon Palomo, a Venezuelan chef who lives in Switzerland, organised the cooking competition at a centre for Sahrawi youth in the camps.

This encouraged Mani to present a project to UNHCR and OXFAM, which agreed to give her 8,000 euros in funding to prepare the premises for her endeavour and buy the oven and other cookware.

‘I really believe that we are making a difference’

‘The idea came from necessity because there is almost no work for young people here, much less so for women’

Those working for Mani are paid around $90 a month. This may seem like a low salary for the average Westerner, but it is well above a normal salary in the camps. For example, the stipend of a Sahrawi teacher is approximately $56 every three months.

“I think it is very important that they have decent salaries and that their work is well paid,” Mani said.

Alhassina Baba works with Mani in the restaurant. The 23-year-old high school graduate was not able to pursue higher education due to personal issues.

“My family has always supported me. They knew about the project and they thought it would be great for me to make my own life,” Baba said.

At 18 years of age, Yaguta Himida is the youngest of the team. On account of her family’s financial struggles, she was also not able to continue her studies. “I really believe we are making a difference,” Hamida said.

“We are the leaders of change,” Mani said. “This is a vital project that serves other young people to realise that despite adversity, there are alternatives and the possibility of feeling useful and able to design your life project.”

Mani hopes to be an example for many enterprising women. Some have already approached her wanting to understand the ins and out of setting up a business.

“I don’t want my business to be an exception and, therefore, I am preparing a course for all the girls that are interested so that they can learn how to start a business and also make pizzas,” she commented.

Having just one pizzeria in one of the camps is only the beginning of Mani’s vision for the future; she hopes to open pizzerias in the four camps near Tindouf.

“I want to open a Sahrawi Pizzeria in each wilaya (Sahrawi refugee camp).”