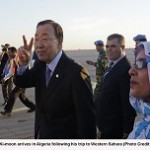 UN Secretary-General Ban Ki-moon’s first ever trip to Western Sahara has sparked a furious reaction from the Moroccan government.

Nick Scott’s hard-hitting article explores why the Security Council has failed to seriously grapple with the conflict over the past quarter century and points out that the Moroccan reaction to challenges over Western Sahara is always aggressive, both publicly and behind the scenes. Morocco often gets its way simply because it’s willing to raise the stakes when others are inclined to back down in order to reduce tensions…(cont.)