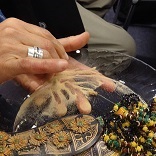 The Annual General Meeting of the Australia Western Sahara Association (Victoria) was held on 1 October in Melbourne.

Mona Khizam’s talk, entitled “Sahara Libre – Camp Notes” was based on experiences during a visit in 2009 with a Swedish study group from the Jakobsbergs Folkhôgskola to the Saharawi Refugee Camps. Mona showed the audience items illustrating Saharawi culture, including an incense burner, some jewellery, a leather tobacco pouch etc.

Mona spoke about some of the people she met in the camps, reading at times from a book manuscript she has written.

She emphasised the way these Saharawis created their sense of identity. She was struck by how they all remained focused on the first essential for them, which is the recovery of their homeland.

A short documentary, Across Sand and Snow made by the study group, illustrated some of the points Mona had been making. It contrasts the aspirations of Swedish teenagers with young people in the camps and their ideas of what freedom, security, independence mean for them. For the young people in Sweden it was largely a matter of how much freedom their parents gave them to do what they wanted to do. Some talked about freedom to walk in the street safely, to enjoy the privileges of living in a democracy. For the young Saharawis the questions all related to being able to live freely in an independent Western Sahara.

Cate Lewis, Secretary of AWSA Victoria, thanked the speaker and presented her with a CD of Mariem Hassan, El Aaiun Egdat.