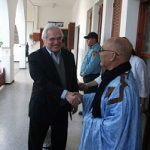 Sidi Ahmed Eddia, Secretary General of the Confederated Union of Saharawi Workers (CSTS – Confédération Syndicale des Travailleurs Sahraouis) was born in El Aaiun in 1948 and died there on 3 January 2017. 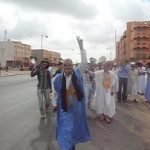 He was well known for his activism, not only for workers’ rights, but also for many other causes supporting Saharawi rights in general.

After his military service with the Spanish army, and work with the construction service, he took employment at the phosphate mine,

Bou Craa in 1974. It was a Spanish company at that time, but they employed a number of Saharawi workers, not all at the lower grades. However, when the Moroccans took over the company, many of the Saharawi workers were laid off. Eddia led the campaign for their rights under their Spanish contracts to be honoured. His efforts to recover promised pensions, worker’s compensation for injury and severance pay were largely unsuccessful, but he refused to allow the Moroccans to bury the dossier. This led to multiple actions, sit-ins and strikes attracting the attentions of the police and security forces.

His family believe his death is a result of heart trouble following a beating by the Moroccan police during a demonstration in 2011. As a result of the attack he spent some weeks in hospital in Spain undergoing heart surgery.

Like all other Saharawi associations under the Moroccan occupation, the CSTS is not allowed to register and become a legal organisation.The same goes for the group he chaired coordinating action following the Gdeim Izik mass protest camp held in 2010, which claims to represent 28,000 Saharawis.

Born in 1948, Eddia worked in public works and later did military service with the Spanish Defense Department in the construction service in the 1960s. Afterwards, from 1974, he worked for Fos Bucraa, the Spanish phosphate company at the Saharawi phosphate mines.

He was abducted in 1977, 1980 and 1986 by various security or military agencies. He represented Saharawi workers at many international trades union meetings and conferences abroad and at the UN human rights commission in Geneva. And many were refused entry or deported when they tried to reciprocate the visit. He also made representations for Saharawi workers with the Moroccan authorities in Rabat. He said that no solution was ever found with the Moroccan government, it was all a waste of time.

The police banned attendance at his funeral, which was held at a cemetery 17 km to the north of El Aaiun. Hundreds of cars and mourners were prevented from accompanying the funeral procession by helicopters and truck-loads of soldiers. Tributes have been received from all over the world noting his tireless efforts for Saharawi rights.