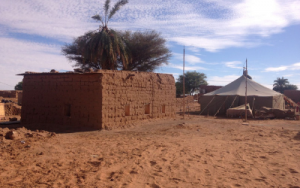 Mud brick house and tent in Dakhla, one of the Western Sahara refugee camps in the south-west. [IMAGE: L OSBORNE, 2016]

Background
Western Sahara is located in Northwest Africa. It is rich in mineral resources, renowned for its fishing grounds and has a great potential for oil and gas. In size, it is similar to the UK.

Western Sahara is a non-self-governing territory, whose people have waited many years for a United Nations-sanctioned referendum of self-determination. It remains on the UN agenda and is considered Africa’s last colony due to its occupation by Morocco, which invaded Western Sahara in 1975.