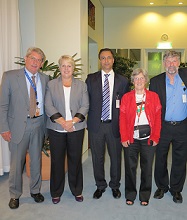 The event included a special screening of “Sons of the Clouds – The Last Colony”, a documentary presented by award-winning Spanish actor Javier Bardem about the conflict over Western Sahara, the last remaining colony in Africa.

Janelle Saffin Member of Parliament and Chair of the Australian Parliamentary Friends of Western Sahara opened the event with a speech in which she said:

“Tonight, in the name of Western Sahara, we welcome diplomats, parliamentarians and the press to our film viewing.

As chair of the all-party Parliamentary friendship group here in Canberra, I am also delighted to welcome members of our group, whose dedication to Western Sahara is a source of personal inspiration.

The presence of all of you here tonight demonstrates the importance and solidarity that attach to the issue of Western Saharan independence.

This is a cause that is rooted in the principles of justice, and the simple demands of a people to claim the freedom to which they have for so long been entitled. It is a cause that resonates within African and far beyond. It resonates in countries that have long been free of the influence of colonial power … and among countries that have more recently established themselves as modern democracies – whose example stands as a beacon for the Sahrawi people.

Crucially, Australia now has a seat on the Security Council. We are hopeful, we demand, that this great country –with its tradition of justice and fighting when the odds are against us – again assume a leadership role to promote human rights, the self-determination and nation status of an oppressed people, just as we so proudly did in the case of Timor Leste and Papua New Guinea.

The film will provide hard-hitting insights into the plight of the Sahrawi. Last month it won the Goya Prize for best documentary in Spain.”

There were also introductory remarks by Kamal Fadel, Representative of the Frente POLISARIO, the political representative of the Saharawi people of Western Sahara and Dean Bialek, former Australian diplomat at the UN, now a Director at Independent Diplomat, the world’s first non-profit diplomatic advisory group, headquartered in New York.

The Saharawi representative mentioned that Western Sahara remains a question of decolonisation under the UN Charter and that it is regarded as the last case of decolonisation on the African continent. He added that the UN has time and again reaffirmed the right of the Saharawi people to self-determination but unfortunately has so far failed to deliver the promised referendum. It is no secret that Morocco has violated UN resolution and agreements signed under UN auspices. He further added that MINURSO has now been present in Western Sahara for over 20 years but what has been missing all along the years of UN presence is the political will and the courage to put pressure on Morocco to allow the referendum to take place.

The Saharawi representative regretted that Morocco has been allowed to defy the international community. This has been possible thanks to the support of France. He stressed that it is unacceptable that MINURSO remains the only UN peacekeeping mission that doesn’t have the mandate to monitor human rights. The need to monitor human rights is necessary given the continuous gross human rights violation by Morocco in Western Sahara.

The Saharawi representative mentioned that the UN Special Rapporteur on torture reaffirmed in a report published in February that torture and ill treatment still occur in Western Sahara.

The Representative reminded the audience of the harsh and outrageous sentences given to Saharawi human rights activists by a Moroccan military court and also the fact that Morocco refused entry to members of the European Parliament who intended to visit Western Sahara which indicate that Morocco has something to hide. All of these acts show the necessity to expand MINUSO mandate to incorporate a human rights mechanism.