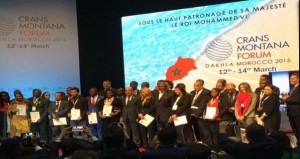 NEW YORK-The UN Secretary General Ban Ki-moon Saturday called on all officials and UN bodies not to participate in the Crans Montana Forum, scheduled for March in the occupied city of Dakhla, Western Sahara.
The Saharawi President and Secretary General of the Polisario Front, Mohamed Abdelaziz, recently sent a letter to Ban Ki-moon, deplored the decision of the board of the Crans Montana Forum to hold its next edition in the occupied city of Dakhla. (cont.)