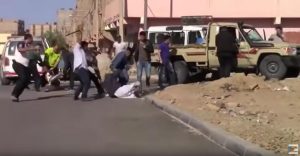 On 7 June 2019, videos began to circulate showing Moroccan police brutally beating up a Saharawi journalist in occupied Western Sahara. Today, an UN opinion calling for his release from prison was made public.
The UN Working Group on Arbitrary Detention has called for the immediate release of the young Saharawi journalist Walid Salek El Batal in a decision made public today. The opinion was issued during the 89th session of the Working Group and can be found here.