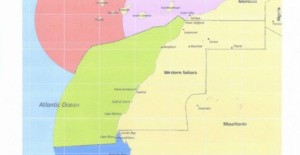 Upon the visit of the UN Secretary-General to the Saharawi refugee camps yesterday, the SADR Government deposited with Ban Ki-Moon – as the depositary of the UN Convention of the Law of the Sea – the coordinates and charts of its exact EEZ claims.
“The coordinates and charts showing the EEZ outer limits will now be communicated to all UN member states trough their Permanent Missions in New York”, stated Frente Polisario in a press release.