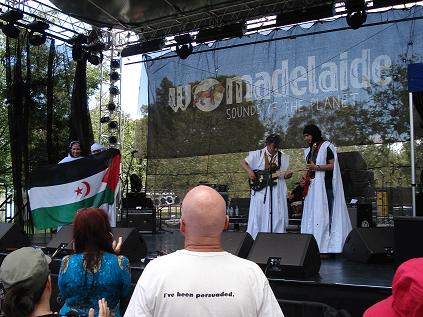 The four day WOMADelaide festival of international music took place between Friday 5 and Monday 8 March 2010 Adelaide (Australia) with the attendance of over 80.000 music and dance fans.
One of the highlights this year was the Saharawi artist and singer Mariam Hassan.
Mariam and her group performed every day during the festival. They sang Saharawi traditional and national songs and performed Saharawi dances.Saharawi supporters in Australia were always present to raise the Saharawi flag and support the group during all their acts.

Mariam Hassan and her group were selected to perform during the Opening and the Gala ceremonies of the festival.
The Saharawis also prepared Saharawi food during Taste the World session: http://www.womadelaide.com.au/pages/taste-the-world
Mariam Hassan presence at the festival was well covered by the media which took interest in the Saharawi culture and cause.
The Australia Western Sahara Association (AWSA) organized a dinner with the presence of the Saharawi representative to Australia to welcome Mariam Hassan and her group to Australia.
During this week thousands of Australians learnt about the Saharawi cause and culture through the music of one of the most talented Saharawi musicians, Mariam Hassan.
http://www.youtube.com/watch?v=0MdG6nwIMps (Mariam Hassan performs during Adelaide festival 2010)