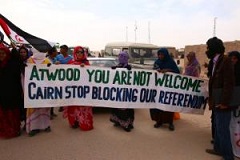 Norway’s sovereign wealth fund has announced it has excluded Kosmos Energy and Cairn Energy from its portfolios because of their oil search in Western Sahara. Approx. 54 million dollars of shares were sold.
“The Council recommends the exclusion (of Cairn and Kosmos)… due to an unacceptable risk of the companies contributing to serious violations of fundamental ethical norms through their hydrocarbon exploration offshore Western Sahara,” the council said.