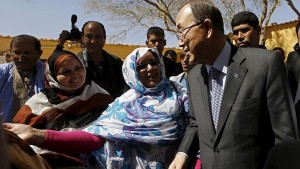 The UN Secretary General, Ban Ki-moon on Wednesday rejected Morocco’s criticism after his visit to the region to restart talks between Rabat and the Polisario Front over Western Sahara, claiming that his goal remained a priority. Mr. Ban visited Mauritania and a Sahrawi refugees camp in Algeria last week in the hope of shifting positions on the conflict that has lasted four decades.