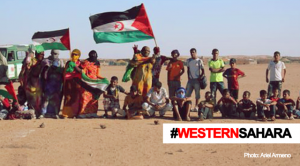 “UN Secretary-General Ban Ki-moon is set to arrive in Western Sahara tomorrow (Saturday 5 March) for the first visit of his tenure. The trip comes at a crisis point for UN talks on Western Sahara following Morocco’s refusal over the last three years to participate in any direct negotiations, its refusal to receive the UN Secretary-General during his current visit to the region, and its killing this week of a Saharawi civilian in the demilitarized buffer zone….(cont.)”